Did I say she was off fresh peaches? She seems to have had second thoughts about that. Peaches are a go!

Dinner last night was Israeli couscous with caramelized onions, chanterelles, bacon, cream, and parmesan. It went over well, but the couscous gets everywhere. Mae really enjoys saying "couscous", though (but who doesn't?).
Posted by Joanna at 7:14 AM No comments:

About time for an update? Yes, I think so too.

We've been eating our way happily through the months. I don't have a new recipe for you today, but I do want to share the sorts of things that Mae has been enjoying lately, in case you're interested and just to help my own memory a bit.

Breakfast, one of the following: toast with butter. Plain yogurt (perhaps with freeze-dried strawberry powder on top). 7-grain hot cereal with dried peaches and cinnamon. Cheese grits. Eggs (fried or scrambled). Wheat puffs, toasted. Berries if we have them.

Berries are big this year, but sadly, she seems to have forgotten her love of the peach during the long, peachless winter, and now won't touch them (well, she ate some in a pie, but that hardly counts). Well, more peaches for me.

Snacks: peas! Frozen peas, straight from the freezer. I put them in a little mason jar, plunk it down on her stroller tray, and she nibbles away. She snacks on cheese to a lesser extent. Some days are cheese days, and others, not so much. Same with bananas. They have their place. Freeze-dried fruit is still a favorite.

We got an insulated snack case that has a freezer insert, so I can take refrigeratables (or hot food) along on our trips to the park-- because why else would we go to the park if not to have a nice picnic?-- and it's been wonderful.  Also for taking supplementary meal items when going out to eat. Yesterday I made a quick tuna and black-eyed pea salad with finely chopped pecans-- it went over very well. A lentil, sun-dried tomato and feta salad was also a hit, but had unfortunate consequences later. Take note: toddlers cannot digest de puy lentils.

Another trick I've learned is that you can make a very serviceable macaroni and cheese by simply 1) boiling the pasta, 2) adding pasta back to pan, adding cream, 3) stir in shredded cheddar to taste, heat gently until it melts. Adjust with more cream if necessary to get the right consistency. Add a little dry mustard, herbs, or paprika if you want to fancy it up. It's quick to make, freezes well. I freeze it in individually-sized portions that I can microwave when I need a quick additional side dish (what? She's still hungry? Ok, how about some of this?). I also like to bring it to restaurants when I fear they may have nothing better than the powdered cheese product on their children's menu macaroni. *shudder*
Posted by Joanna at 7:25 AM No comments: 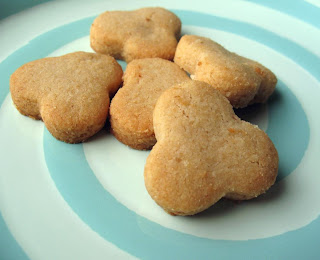 Easter was a bit of a challenge. I have fond memories of hunting for eggs and a basket full of goodies-- I'm partial to the Reeses' Peanut Butter Egg-- but wanted to keep the sweet factor to a minimum. So I came up with a couple of things that were bite-sized, tasty, and small enough to be stashd in a plastic egg, yet not too extravagant in the sugar department. For this shortbread I use mostly whole wheat pastry flour, and natural peanut butter (I recently discovered how easy it is to make nut butters at home if you have a food processor: 1) roast nuts, 2) process. Add a little oil if you need to to get them to the right consistency. Voila!).

Cream together the butter and peanut butter. Add in sugar, salt (if you decide to use it), and vanilla. Stir in the flours. Refrigerate 30 minutes or so until it's not totally squishy. On a floured surface (Silpat!), roll half the dough out to between 1/8-1/4 inch thick, and cut out your shapes with your cutters. They don't puff up much, so you can space them fairly close together on your pan. Bake at 350 just until bottom is beginning to turn golden, 7-9 minutes. You could also pat it into the bottom of your trusty cast iron skillet and bake the whole thing for quite a bit longer (30 minutes?), and cut it into wedges when it's done.

Gonna try it with cashew or almond butter next. Or maybe pistachio!
Posted by Joanna at 11:46 AM No comments:

Have I mentioned how much I love 101Cookbooks? Because I do. Everything I have made from there has been stellar. Even when I'm a bit skeptical-- you know, you look at the ingrdient list and, mindful of previous disappointments in the realm of whole grains, greens, and beans, proceed cautiously. And then discover that whatever it is is absolutely delicious.

Like the Baked Farro Risotto, the leftovers of which I'm eating now (well, I used oat groats because my farro was buggy, but it still turned out). I have someday-plans to use pearl couscous in this and serve it to Mae as the holes of a certain well-known canned ring-shaped pasta. If such marketing to her turns out to be necessary (which last night, it certainly didn't. She liked it almost as much as I did).

Or like these, a sort of sugar-free little cookie. I know. "sugar-free cookie"-- the skepticism registers. And yet! I subbed chopped dates for the chocolate, and it's still fab.
Posted by Joanna at 11:56 AM No comments:

Fork use is proceeding apace. There was an unfortunate incident in the first couple of days where she was all excited and showing off at a restaurant and nearly stabbed herself in the eye, but other than that, she's getting the hang of it.

No new recipes of my own at this point, but this lentil soup from 101Cookbooks was a huge hit with everyone, including Mae. It's the best lentil soup I've ever had-- usually lentil soup makes me feel at best virtuous and satisfied, but this one actually manages to seem indulgent. Without actually being so. Amazing. Go try it. (Browned butter, I'm telling you! Browned butter.)

Also made Ma Po Tofu last night. I was worried it would be a little too spicy for her, but she tucked into it, yogurt on the side just in case she needed a cool down. Even ate some of the tofu, which she has so far mostly given a pass despite its surface resemblance to cheese. She is not to be fooled.

In the last couple of months we've discovered Trader Joe's freeze dried fruit, it's our go-to portable snack now. In order of preference: strawberries, banana, mango. Blueberries were briefly a hit, but now get set out onto the floor. If we go to the park (which we have every day for a week or so, until today when the temperature cruelly plummeted again), snacks are a must, otherwise she starts trying to confiscate other people's snacks.

Now that she's a bit older, I don't feel the need to be quite so strict about her sodium intake. Sugars I still try to avoid, though I do share anything I've got so she doesn't feel excluded. I'm not quite sure yet what the right approach to take is with sweets. On one hand, I don't want it to seem special or like a "treat" (which implies that there's something wrong with the other food she usually gets), yet I do want it to be enjoyed infrequently and in moderation. I guess maybe those aren't really at cross-purposes-- after all, I enjoy, say, Thai food infrequently and in moderation, but that doesn't make it A Big Treat. Not like cupcakes. Sweets occupy a certain place in landscape of desire, and I'd like them to have a different role in hers-- but I'm so bound by the way the system works for me that it's hard to imagine it really going any other way.

But what I was going to say was that now that the sodium thing isn't such a big deal, I'm going to frame my preferences for her in terms of avoiding processed food. And if you do that, the sodium and the sugar tend to be minimized automatically.

She's waking up from a nap now, more on this later (maybe).
Posted by Joanna at 1:10 PM No comments: 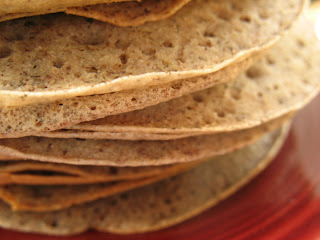 These pancakes are great-- quick to whip up, they cook quickly (no flipping involved!), and store and reheat well. They feature buckwheat flour (good stuff!) and some AP flour to hold them together (what with buckwheat having no gluten). They're thin and flexible like crepes, but no egg is involved-- a great multipurpose wrap. They remind me a bit of Ethiopian injera. I like them as a wrap for tuna salad; Mae likes them best with nut butters or nacho cheese spread (not as scary as it might sound-- my own recipe to come soon). Recipe from RecipeSource.

In a bowl, whisk together the flours, the cold water, and the salt (if you're using it). It'll be pretty thick. You can let it sit there for a while until you're ready to cook. When it's time, preheat your cast iron skillet. You might want to preseason it (I heat up some grease, get the pan good and hot, and wipe out the excess oil quickly with a paper towel), but don't grease the pan like you would for pancakes. While your pan is heating, whisk in the boiling water and then the baking soda. Pour some into the pan and swirl to coat. It should be a very thin layer, and if your pan is hot enough will sizzle and start to bubble immediately. Lots and lots of tiny bubbles will form, and the surface will gradually set. Don't flip it! Just let it set, and when it's done in the middle, slide a knife or fork under the edge to pry it loose. You may have to finesse it a bit, but if it won't come up relatively easily, it may not be done enough on the bottom. Let it cook a little more-- when a nice crust forms, the ploye will come up more easily. Stack it on a plate and repeat.

I used the smallest skillet I have (about 5 inches?), and got 19 of them with this recipe. They're soft enough that even a little one who isn't quite up to regular bread yet should have an easy time gumming them.
Posted by Joanna at 12:15 PM No comments:

Via Food Politics, see this study on health claims on foods marketed to children.  Hey, guess what? If it's marketed to kids as healthy, it probably isn't.
Posted by Joanna at 8:00 AM No comments: