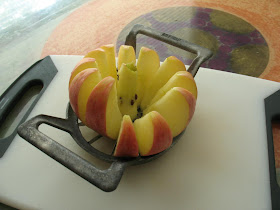 Fruit was one of the first things Mae went for when she started eating solids. Peaches and nectarines are her true loves (the first time she had a peach, she cried when it was all gone), and she's fairly enthusiastic about plums, bananas, and mango as well. Apples are a little bit more of a challenge for someone with no teeth-- left raw, they're a choking hazard. Stew 'em up in a pan with a little cinnamon, though, and you've got a winner-- nice and soft, easily grasped by little hands, and portable as well. I make up a batch and keep the slices in the fridge in a little container, ready to grab when we're going out to dinner or for a quick snack or breakfast.  She started eating these at 6 months old. 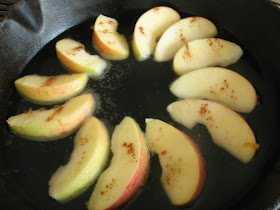 Stewed cinnamon apples
1 apple
sprinkle of cinnamon
Cut the apple into 12 wedges. Remove core. You can peel it before cooking or if you're lazy like me, cook with the peel on and just pull the peel off before you give it to the baby.  (I find that if I leave the peel on, she can't chew it up and gags on it, so I do recommend removing it at some point). Put the apple wedges in a 12 inch pan (I like cast iron) with about 1/2 cup of water. Sprinkle each slice with cinnamon. (Ginger or cardamom would also be good!) Cook apples over medium-low heat, turning once or twice, until the water has evaporated and they're soft and cooked completely through.  If you wander off and forget about them, they'll get nice and caramelized. Even yummier!
Joanna at 10:30 AM
Share